This tutorial presents a small program we have developed thanks to Loic Norgeot's awesome and opensource plugin for Blender, called "Bake my scan". It is a plugin that allows you to quickly process your 3D scans or highly complex objects for them to be imported in real-time applications.

We have developed a version of this plugin which allows you to simply drag and drop an object on a script, and it will automatically process it and export five different versions of the decimated object, from very low poly (1 500 triangles) to relatively high (120 000 triangles).

You can download the script on this GitHub repository.

When NOT to use the script¶

The script is not magic, and there are a few cases in which you will certainly encounter problems.

How to use the script¶

Install the script and prepare your object¶

1.2. Unzip the script wherever you want on your computer. The folder name should be "Automatic_BakemyScan-master", if you don't change anything. 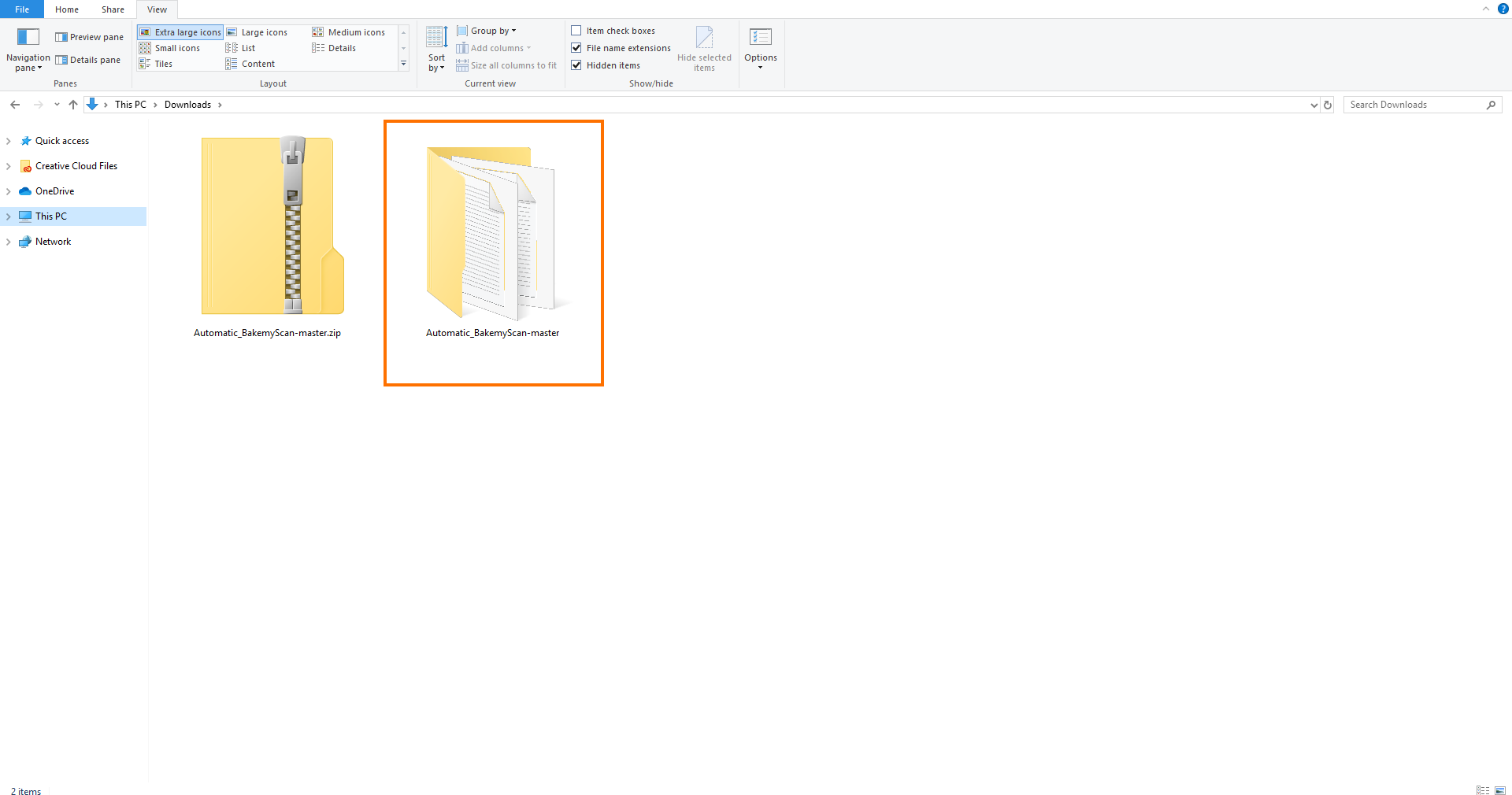 Beware of the path

1.3. In the "Input" folder of Automatic_Bakemyscan-master, create a new folder named after the object you want to optimize. For example, let's say "Cat". 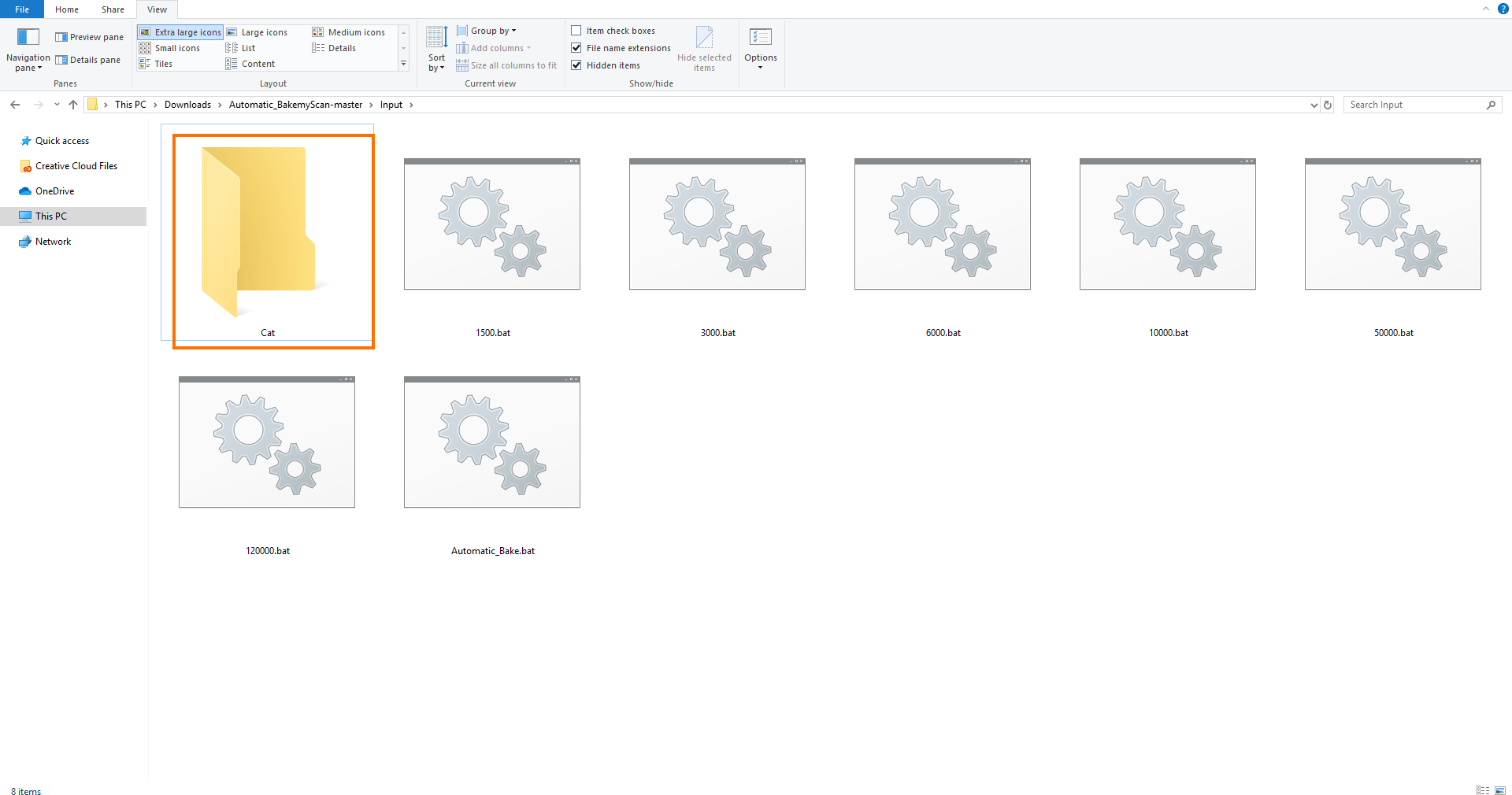 1.4. In this folder, first you have to put your high-poly mesh, named exactly like the folder (in our case, "Cat"). In the end, your object should look like something like "Cat.obj" or "Cat.fbx".

1.5. In the same folder, you now have to put your diffuse texture, that is to say the color map of your object. There again, it should be named exactly like the folder, but you should add "_color" to the name of your texture. You now should have something like "Cat_color.jpg" or "Cat_color.png".

If your object has several color textures, you must create a "Color" folder and put the textures in there. Each texture should be named "name_color0", "name_color1", etc.

If you want to use the script to process an object coming from Sketchfab, there are a couple of things you should be aware of.

2.1. Get out of the folder you have just created (in our case "Cat"). You can see a script named Automatic_Bake.bat. You have to select your "Cat" folder, and drag and drop it on that script.

2.2. A Windows console is going to appear. Just let it run until it says "Process done, you can close the console!" In the console, there will be a moment where you will see a succession of "Invalid clnors in this fan!" messages. Even if it seems to have crashed because you can't see anything but these messages for a while, this is completely normal. Just be patient!

2.5. There, you will find a folder with the name of your object. If you open it, you will see seven folders. Six of them are named "verylow", "low", "medium", "high", "veryhigh" and "ultrahigh". These contain the data of the five decimated versions that the script has exported. It contains the baked textures, and gives you information about their resolution.

If you want only one version

Alongside the "Automatic_Bake.bat" script, you can see other scripts named "1500.bat", "3000.bat", "6000.bat", etc. As you might think, these are scripts which are dedicated to creating only one decimated version of your model, not the five: "1500.bat" will decimate to 1500 triangles, "3000.bat" to "3000", etc. If you have a precise idea of the level of decimation you want prior to its processing, just drag and drop your folder on one of those scripts, and go find the result in the "Output" folder :)

There you are, your model is optimized for Minsar Studio. Now you just have to drag and drop your final object in the provider of your choice, and access it through Minsar Studio. If you want to know more about this awesome script by Loic Norgeot, we strongly invite you to go see his page bakemyscan.org and use his work!

If you want to learn how to do this yourself

Loic Norgeot's script is awesome because it gives non-technical people access to the complex process of optimizing a 3D object for real-time applications. However, if you are curious and want to do this by yourself, you are welcome to have a look at this tutorial that explains every step of the process.